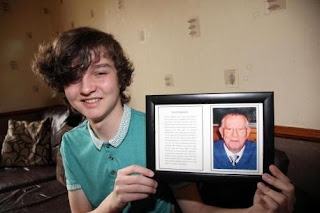 A kind hearted schoolboy is hoping to raise thousands of pounds for the nursing home that cared for his granddad before he died. Teenager, Ted Williams, 16, of Selsdon, has already made around £1,000 for Selhurst dementia care centre  through doing car washes, bake sales and raffles – and he is far from finished yet.

He told the Croydon Guardian, “With the money they raise they take patients down to the beach, or out for dinner. They want to buy a music set to stimulate their mind and keep them active, because if they’re not active it makes them worse."
Posted by Unknown at 05:19