All Change for Labour: Jewitt Out, Pelling In 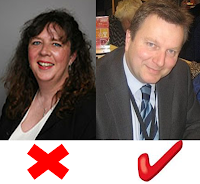 Lifelong Labour activist Karen Jewitt has failed to win selection in Woodside, a constituency she has served in for a number of years. The decision was taken by local Labour Party activists and has shocked Croydon’s political community.

The news was enthusiastically tweeted out via Inside Croydon, a blog of which former Tory and now Labour candidate Andrew Pelling is special correspondent.

The Tweet announced that Ms Jewitt ‘fails to win selection.’ It was tweeted at a Guardian journalist and the editor of Labour List, presumably to spread the news as far as possible.

Mr Pelling was announced as the new face of the Labour Party last week, and received solid support from Labour leader Tony Newman, who was until recently a ward colleague of Ms Jewitt.